Currently in its pilot phase, Digital Blackfriars is a set of interrelated digital humanities projects designed to teach visitors early modern theater history through exploring the history of the Blackfriars district in London. The initial phase of the project is centered around Ben Jonson's The Alchemist. The Alchemist, taking place entirely in the Blackfriars--where Jonson himself lived--and written to be performed in the Blackfriars Theatre, makes an ideal test subject for exploring the relationships between place and performance. Digital Blackfriars brings together the archival material of the Loseley Collection and the dramatic text in new ways, both online through the project website and in the physical space of modern-day Blackfriars with a planned augmented reality experience.

The Alchemist and Site-Specificity

Jonson’s The Alchemist is an ideal piece for exploring the relationships between place and performance. The narrative of the play is set entirely within London’s Blackfriars district, where Jonson himself lived, and home to the Blackfriars Theatre, for which the play was written. Using a variety of digital technologies, we are able to recreate aspects of what it would have been like to see the play in its original context, as well as articulate the argument for understanding The Alchemist as a piece of site-specific theatre.

The term site-specific is most often used in relationship to visual arts such as sculpture, although more recently performance studies has claimed the term as well [Kaye (2000); Pearson and Shanks (2001); Wilkie (2012)]. Work in other fields on the concepts of space and place has also provides relevant connections to the topic of site-specificity and locative artifacts: from cultural studies [de Certeau, M. (1984);  Bachelard, G. (1994); Auge, M. (1995), Kwon, M. (2002)], literary studies [Bly, M. (2007); Hopkins, D.J. (2007); Howard, J. (2009)], architecture [Tuan, Y. (1977)], design [Charitos, D. (2009)], and media studies [MacIntyre, B. et. al. (2004); Bolter, J. D. et. al (2006)]. Across all of these engagements with the concept of site, a deep interconnection between place and content is emphasized. Sculptor Richard Serra has provided what continues to be a key definition for site-specific art: “Site-specific works deal with the environmental components of given places. The scale, size, and location of site-specific works are determined by the topography of the site, whether it be urban or landscape or architectural enclosure” [Serra in Kwon (2002), 12]. A site-specific work, then, is one that is created specifically for a particular location, and whose content is determined by the space it will occupy.

A close examination of Jonson’s The Alchemist and supporting historical documentation suggests this work includes a deep connection between place and content, and was likely intended to be understood by its contemporary audiences as site-specific. The play was written for the Blackfriars Theatre, and the action of the play was set in the Blackfriars district as well, in a house near to the theatre itself. This positioning is unique in the early modern theatrical world: while many plays were written to be performed in the Blackfriars Theatre, The Alchemist is one of only a small handful that is also set in that environment. Critic R. L. Smallwood explains that Jonson’s “[...] temporal and locative immediacy is carefully built into the play. The audience within the play and the audience in the theater are one and the same” [157]. Despite these and other strong textual ties to site, the fact that the site of the play’s original setting and performance no longer exists creates a disruption in the relationship between the play and the site. The initial phase of the Digital Blackfriars project seeks to address this disconnect.

The Problem of Representation: Site, Authenticity and Simulation

Even though this project is developed around the concept of site-specificity, there is a problem in determining exactly what constitutes a “site.” This problem of the shifting nature of the term has been explored by Kaye in depth. However, this problem becomes magnified in the case of The Alchemist in the context of creating a map of the Blackfriars site based on the pertinent historical documentation contained in the Loseley manuscript archive. This archive includes documents spanning nearly two hundred years (1489-1682), during which the Blackfriars changed in many significant ways. Nevertheless, some important aspects of the site persist even today: most of the district’s original streets are in their original locations [Whitfield, P. (2007); Barber, P. (2012)], and a few of them--most notably Playhouse Yard--reference topographical features that have long since vanished.

Because of the problematic nature of determining “the site,” the Digital Blackfriars project must contend with a kind of temporal-specificity that parallels site-specificity: if The Alchemist was written for a particular place in London, so too was it written for a particular time. We can never completely replicate an environment, or fully recapture the audience experience of the original production. It is possible, however, with the use of digital media,  to simulate the environment in a way that engages contemporary audiences with the site-specific nature of the play.

Additionally, the use of digital technology itself results in complex negotiations around the concepts of aura and authenticity. This question of aura becomes especially interesting in the case of work that combines the physical and digital, as in augmented or mixed reality  [Bolter, J. D. et. al (2006)]. As opposed to virtual reality, mixed and augmented reality systems maintain a connection to the physical.  This connection can provide the possibility for a differently embodied form of experience, which includes elements of a reproductive technology experience, and is “both immediate and mediated”  [Bolter 29], thus highlighting both the presence of site (or a site’s remains) as well as the absence of site.

The Digital Blackfriars project addresses the problematic nature of site-specificity in a site that no longer exists by providing multiple experiences, each addressing a different aspect of the play and the remaining traces of the site. These multiple nodes--the map and its connections with the Folger’s manuscript collections, and a planned AR app experience of the history of Blackfriars and its relation to the site specific plays staged there --provide different kinds of access for multiple audiences. Each of these nodes provides a means for audiences to engage and interact with the archive itself in different ways depending on participant interest. For example, researchers will be able to explore the original documents along with their connections to Jonson’s text, while participants in the augmented reality experience will be able to interact with a version of the play unlike any previously staged. These different experiences are not mutually exclusive, and in fact compelling connections are revealed by participating in more than one, although this is not required.

Moving forward, we plan to conduct user testing to solicit feedback on the each node of the project, and develop a framework that could be applied in practice to create similar explorations of other literary works that also demand attention to site-specificity. Future objectives include collaborations with colleagues in a variety of fields, such as architectural history and palaeography, to expand our design such that the content is accessible for a range of interdisciplinary uses. 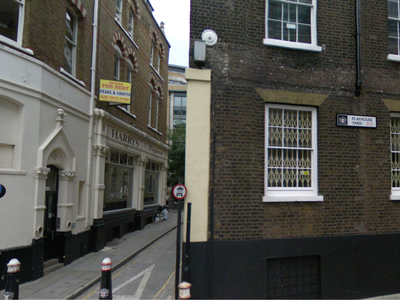 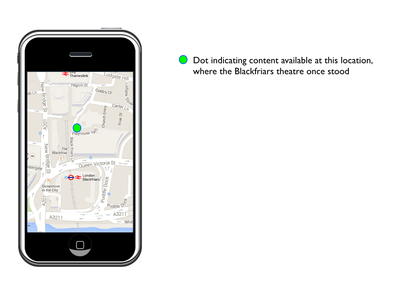 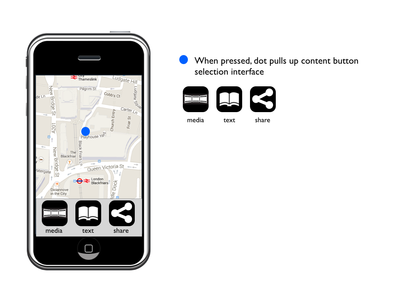 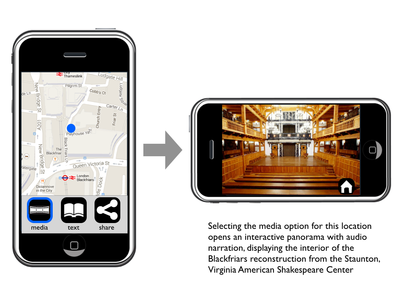 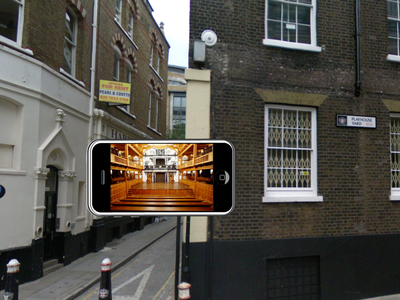 History of the Blackfriars District

The Blackfriars District was originally the site of a Dominican friary, so named because of the black cloaks worn by the monks. When the monastery on the site was dissolved by Henry VIII in 1538, many of the former abbey’s buildings were granted to Thomas Cawarden, the Master of the Revels, for his use in planning and preparing various forms of entertainment for the court, as well as giving him the privilege of leasing land and houses to others.  Because of its religious history, the land also entered a kind of legal limbo: Henry had allowed the area to keep the privilege of sanctuary, which "evolved into immunity for debtors, escaped felons, and sex workers." The district became a liberty, a walled-in, self-governed neighborhood within the City of London that was not subject to the lord mayor's jurisdiction. This lack of civic authority meant that theatre was free to flourish in a way it could not do elsewhere within London's borders.

Richard Farrant eventually took over a building formerly belonging to Cawarden in 1576 and began using it as a rehearsal space for the boy actors, the Children of the Chapel Royal, and as a performance space that became the first Blackfriars Theatre. After Farrant's death, the building was sold to James Burbage, creator of the Lord Chamberlain's Men, the company for which Shakespeare wrote for much of his career. Some of the plays written to be performed in the theater were Francis Beaumont's Knight of the Burning Pestle, John Fletcher's The Faithful Shepherdess, and Ben Jonson's The Alchemist, and it has been speculated that many of Shakespeare's late plays were first performed here. Jonson lived in the district for many years, and Shakespeare bought a house there in 1613.

The Puritans closed the theatres at the start of the Civil War, and the building was pulled down in 1655. The site was eventually incorporated into the offices of The Times of London, and in 1958 the Mermaid Theatre opened in the district, making it the first theatre to be built in the City of London in over three hundred years. The borders of the district are still easily observable, traced by modern roads: New Bridge Street to the West, Pilgrim Street to the North, and St Andrews Hill to the East. Blackfriars Lane runs up the center, and off of it stands Playhouse Yard, marking the place where the original theatres once stood.

The Loseley Collection is housed at the Folger Shakespeare Library, and contains 712 items dating from 1489-1682. The collection, as the Folger describes it, "Consists of papers collected by the More family of Loseley Park, Surrey, dealing largely with: the Offices of the Tents and of the Revels under Sir Thomas Cawarden (d.1559); property in Blackfriars, London, owned by Cawarden and later by his executor, Sir William More (1520-1600) [...]." This collection of documents is instrumental in understanding the history of the Blackfriars district, the Blackfriars Theatre, and the plays written to be produced there by playwrights like Shakespeare, Jonson, Marston, Beaumont, and Fletcher.
Powered by